The Ruin Bars Of Budapest

For a city renowned for its nightlife after the fall of the Soviet empire, it took a lot of ingenuity to keep its position at the top of the pyramid. The city’s pub-crawls are legendary and normally end at breakfast. The alcohol is cheap, public transport is fantastic and everything is walking distance around the Andrassy avenue where all the bars are. To top all that, it would take something very new.

And then the concept of ruin pubs began.

It’s so simple, you really can’t understand why no-one’s ever thought of this before. Take an old derelict building (tons of them around, the soviet regime wasn’t exactly polite about this), preferably one bombed out of its pants during a war (they weren’t polite about that either). Get (really eclectic) artists to paint and redecorate it with crazy themes and psychedelic lighting design. Furnish it with everything except normal furniture. Add exposed wires, dark corners, some shrubs growing on the walls. And achhhoo! You’ve got a pub which looks like a bomb shelter, but serves alcohol, has large spaces, is not associated with anything traditionally classy, yet is the new fad in the city.

Whatever the concept may be, what I found most astounding was that there are usually no queues at the entrance (these places are mostly big enough with lots of space), no menacing bouncers out front (they are quietly sitting nearby though, watching for troublemakers nonetheless) and no 40,000 watt Times-square-neon-signs larger than the statue of liberty (mostly just a small Hungarian one) at the front entrance.

Sometimes even the directions are difficult to follow as most of them aren’t advertized. And if you didn’t know the exact location, you’d probably walk right past them. I went up and down the street, where Szimpla Kert was, THREE times. (OK fine, I’d already had 6 beers in me, my Iphone’s ‘location’ feature was switched off, so it kept showing that I was in Sultanahmet (Istanbul) and my partners were all Aussies who really didn’t care where we were going as long as no one objected to their board shorts and thongs (sorry, flip-flops to you and me)). Still, I was certain that NO-ONE could live, much less party in the street that I was in. Then I saw people just disappearing from the middle of the road, and I realized that the double door on the right was the entry. Even Instant, which is located on one of the streets off Andrassy Avenue, has just a small signboard and no queues (not before 11.00 pm).

Most of the pubs are District VII (Erzsebetvaros) and all walking distance from the Oktogon and Deak Ter. The real deal with them is that even with the graffiti based décor, they’re pretty affordable (mostly due to the city itself being cheap) and that makes them really sell. A beer is about 500 HUF (1.8 USD). In Instant (which steers nearer to a ‘normal’ bar), its 1.95 USD. Some of them offer basic snacks and pizzas which make for a heavenly break during pub crawls.

So let’s see what we have here……

FOGAS HAZ. This is a two-storey palace with a huge dance floor, 3 bars and a garden which smells of grilled food. It’s on Akacfa street and the sign says ‘Fogasorjavitas’. Yup, that stumped me too.

It has a good mixture of live bands and DJs. It is also a hit with the locals due to its chill vibe. The open area is tented for rainy weather. There also have art exhibitions here.

INSTANT. Located near the main Andrassy Avenue, this is one of the biggest pubs in ‘downtown’. It’s actually two townhouse apartment complexes joined together to form one gigantic arena. It’s considered an ‘art bar’ due to its eclectically-themed rooms.

Instant – with a tree in the middle.

There are over 20 separate rooms connected by dimly lit corridors. You get to drink in different areas which were essentially rooms of an apartment. The two open-air courtyards connect all the (seven!) bars and dance floors together. Exposed utilities, dark corners and a rustic ambience offer a great experience. All minutes away from a metro station. (Very important, as the chance of you leaving this place with a clear sense of direction is really non-existent).

Instant – crazy artwork and a WC as a seat.

Just don’t go early, like before 11.00 p.m. It’ll look like an Iraqi bomb-site, but with a deserted bar. Also, make sure you see the upside-down room where the furniture is hanging from the ceiling.

KUPLUNG. This former car depot for taxi-drivers in Budapest is on Kiraly utca. Which has great night-life and is just a walk from Deak Ter. It has an indoor concert hall and a large outdoor terrace with long tables – great for large pub-crawl groups. It has different programs for entertainment, like films, theatre performances and exhibitions. It’s also a good place to just have a coffee and admire the graffiti. 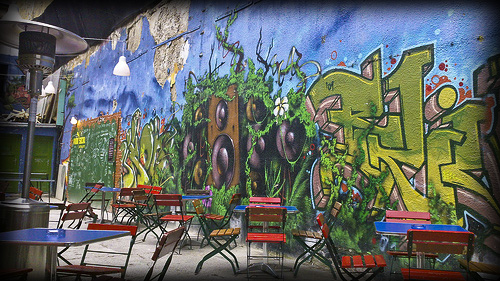 CORVIN TERRACE. This roof-top bar is above a supermarket, with fabulous views of the Buda hills and the neon signs of the city. In summers one floor below the terrace is preferable, bathed in red light and rewinding your memory button to the themes from the 80s. This is unabashedly retro, right down to the shop at the Tarsalgo bar, where you can buy clothes of local Hungarian fashion designers, as well as the bar’s souvenirs. There’s even a barter system here. The supermarket lift that takes you up also serves beer and spirits.

Corvin Terrace – some of the best view of the Buda Hills

The music here is the strong point, with a very wide electronic selection. There’s Irie Maffia (Hungarian reggae-dancehall), Palotai and Cadik duo and even Naga and Beta, popular for their Hungarian minimal techno.

SZIMPLA KERT. The grand-daddy of all of them and the first one to start the trend. It’s on Kazinezy utca in a dilapidated building. It’s an enormous pub with a large open courtyard and a top floor comprising of eclectic furniture and cock-tail bars. There are different sized rooms which are mostly decorated from the local underground art scene of Budapest. There’s a booth made from an old Trabant car, a bathtub couch and a room completely covered with glowing wires. 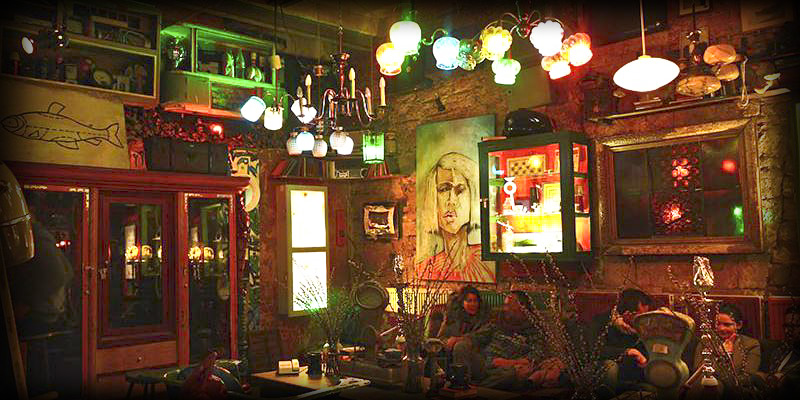 This is my favourite bar, mostly because it doesn’t have a dance floor, but lots of live music. It’s a great place to just chill before heading out for your more serious pub-crawls. Or just walk around and enjoy the rustic ambience and the obvious ‘underground’ theme, while sipping a Dreher and wondering where the hell those damned Aussies have gone. You can really get lost here. 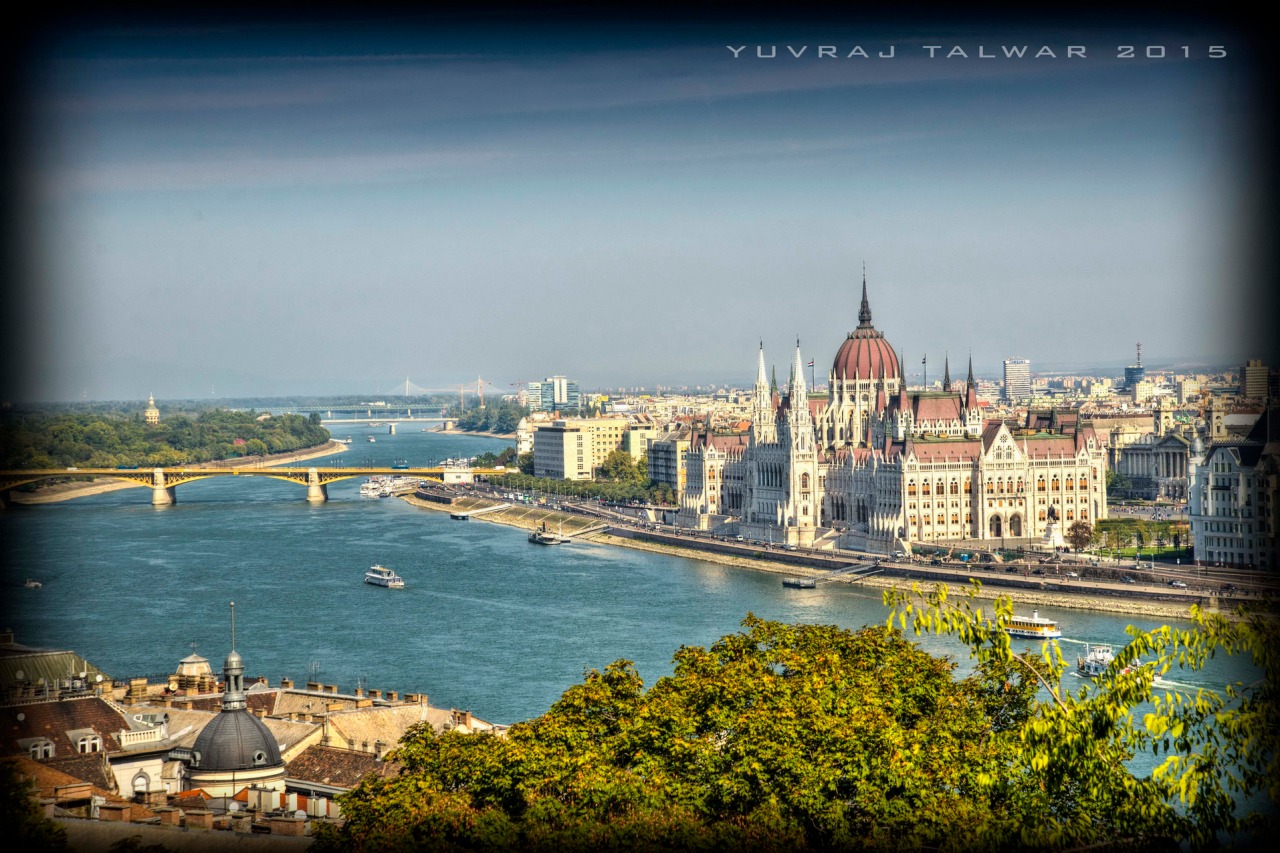