Cape Buffalo. One of the largest animals in Africa, they have been reported to kill more hunters in Africa than any other animal. They are known to ambush humans that have previous wounded or injured them. Infact, the adage ‘an elephant never forgets’ can be matched by ‘a buffalo never forgives’. (Much like your ex-wife). They have also been known to attack people that have harmed them, even years after the event. They can kill lions, and can seek out and kill lion cubs as preventative punishment.

Thompson’s Gazelle. One of the fastest animals on the planet. Reaches speeds in excess of 80 kmph. While running, they occasionally jump in the air with all four feet above the ground. This is known as “pronking” or “stotting.” 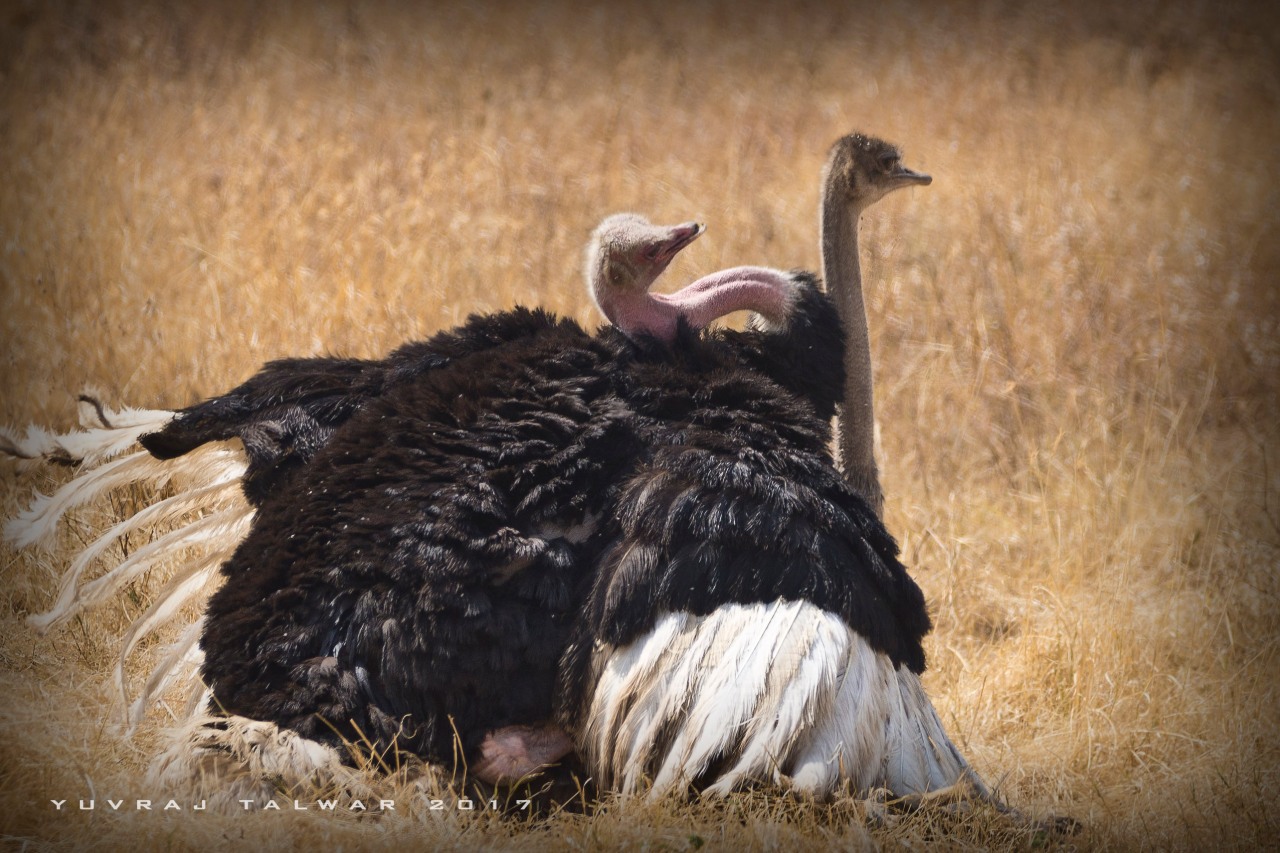 Ostrich mating. The flightless ostrich is the world’s largest bird. They are the fastest runners of any birds, or any two-legged animal, and can sprint at over 70 kmph, covering up to 5m in a single stride – that’s the length of a large sedan. Their eggs are 15 cm long. Contrary to popular belief, ostriches do not bury their heads in the sand: the myth probably originates from the bird’s defensive behaviour of lying low at the approach of trouble and pressing their long necks to the ground in an attempt to become less visible. Their plumage blends well with sandy soil and, from a distance, gives the appearance that they have buried their heads in the sand. They also lack teeth, so they swallow pebbles to grind their food. An adult ostrich carries about 1kg of stones at any time. They have three stomachs. (Which basically means don’t sit next to them if they’ve had red beans or kachori for breakfast.) 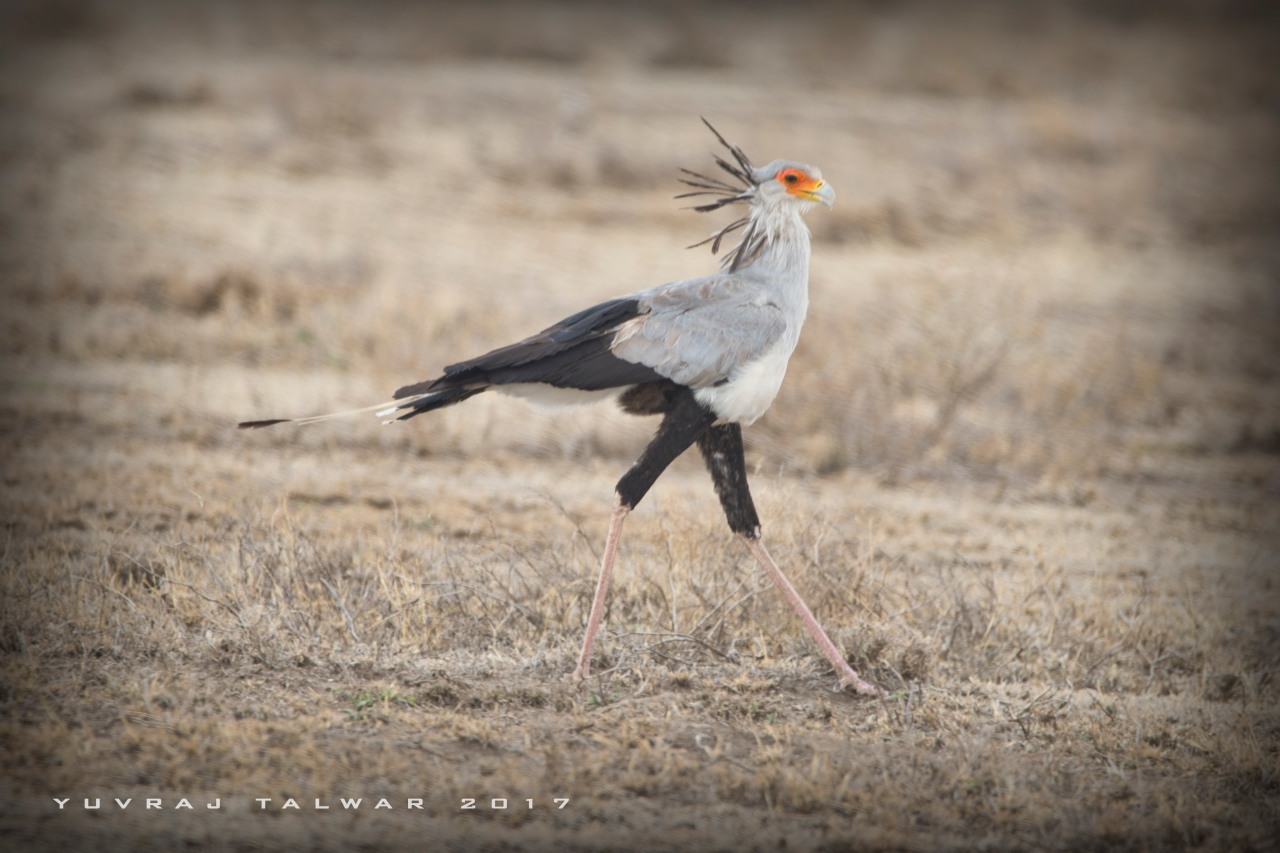 Secretary bird. Its name is popularly thought to derive from the crest of long quill-like feathers, lending the bird the appearance of a secretary with quill pens tucked behind their ear, as was once common practice.

Young lion cubs waiting for their mother to return from hunting.

Lions are THE laziest members of the cat family. They sleep for about 16-20 hours in a day. You can tell how old a male lion is by looking at his mane. The darker the mane the older he is. An adult lion’s roar can be heard as far as 5 km away. Female lions do the hunting and male lions are the first to eat food. 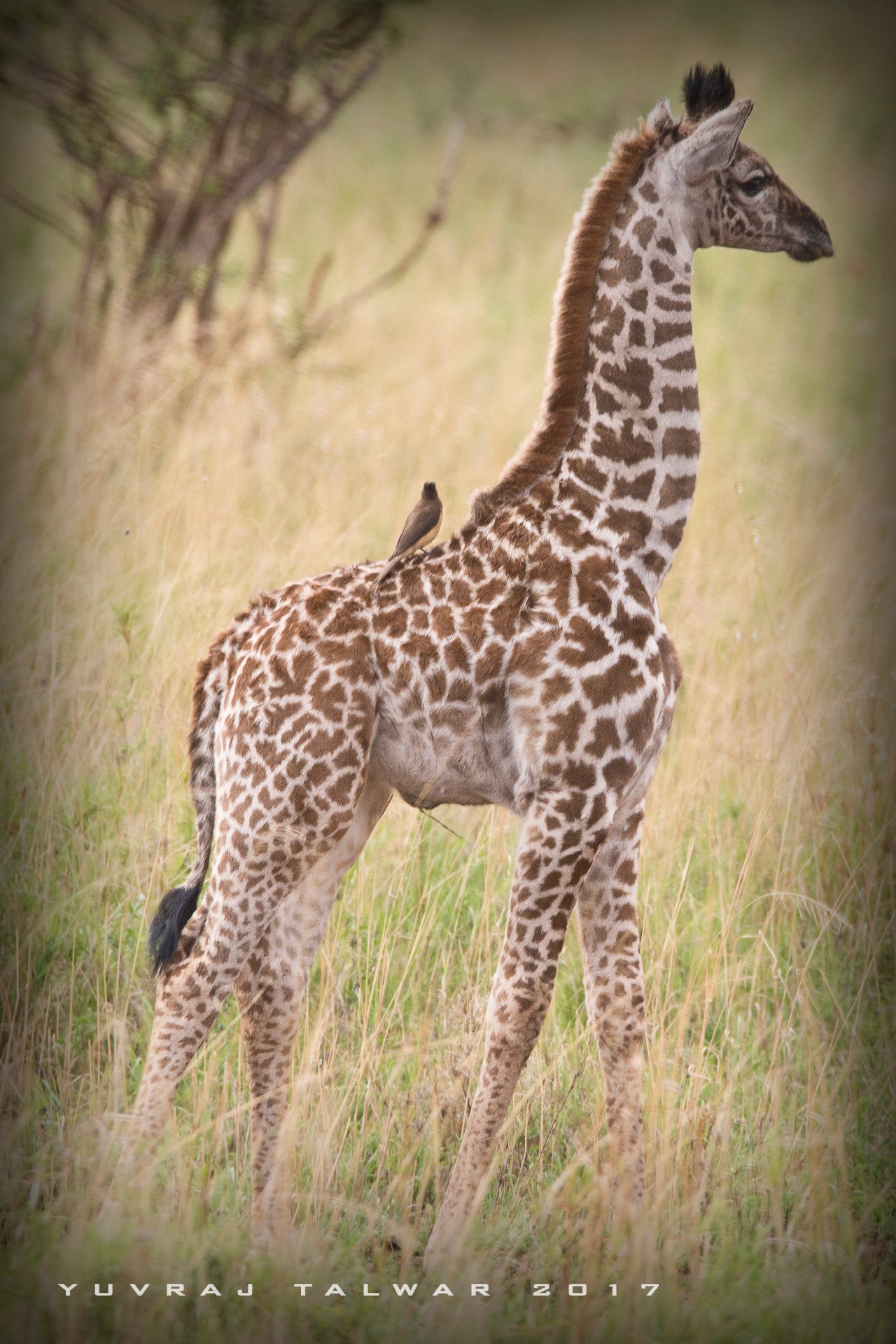 Baby Giraffe. Female giraffes give birth standing up. The young endure a rather rude welcome into the world by falling more than 5 feet to the ground at birth. These infants can stand within half an hour and run with their mothers an incredible ten hours after birth. Oh, and they’re faster than Usain Bolt.

Maasai tribe. Indigenous to the Masai Mara and Serengeti National Parks. In this tribe a man’s wealth is measured in terms of the cattle he owns and the children he has. The Maasai men practice polygamy. In fact, the first wife gains a higher status in society when the man marries again. (I wish my ex-girlfriends could understand this….)

African Elephant. The world’s largest land mammal. The ears’ large surface area helps radiate excess heat under the harsh African sun. The ears are also often used to communicate visually. Flapping their ears can signify either aggression or joy. They are capable of producing and perceiving sounds one to two octaves lower than the human hearing limit. I wonder how the females sleep when the male is snoring at minus two octaves. Must be REALLY flapping her ears in her sleep.

Mating Lions. They are known to sometimes mate over 300 times a day. If you’re getting any ideas, please remember that they do it WITH THE SAME MATE. Hell, I cant even have the same cereal more than once…

Warthog. These strange looking pigs grow up to 1.5 meters long. They’re very fast runners and can reach about 45 kmph. Their tusks can grow up to 60 cm and can do a lot of damage to predators. The character of Pumbaa in The Lion King was a Warthog. They have very short memories. They sometimes stop dead in the middle of being chased by predators, for the brilliant reason that they’ve forgotten why they’re running! (Sounds very much like one of my arguments.) 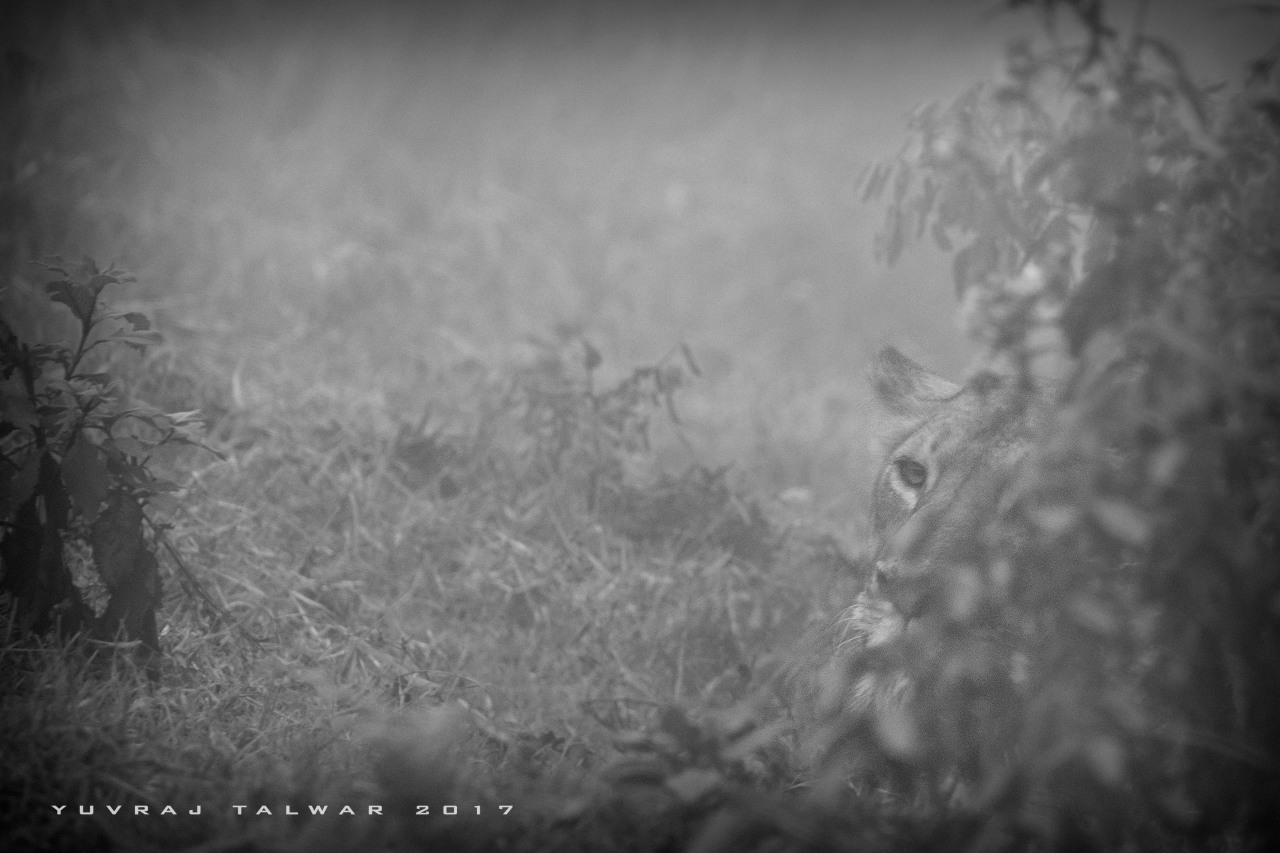 There’s an animal in this photo. I’m not Lion to you.

Spotted Hyena. They are more than just the villains in The Lion King. They are extremely cunning and are considered to have higher I.Q.s than chimps. Hyenas and lions fight over the same territory and hunt the same prey. They steal each other’s food and hyenas are known to hunt baby lions. They are intelligent pack hunters. A group of hyenas can devour an entire Zebra (with no leftovers) in under half an hour. They are also one of the few species that are matriarchal. The females have THREE times the testosterone in their bodies than the males. Even baby girls rule over baby boys. (Suspiciously like my pre-adolescent years.) 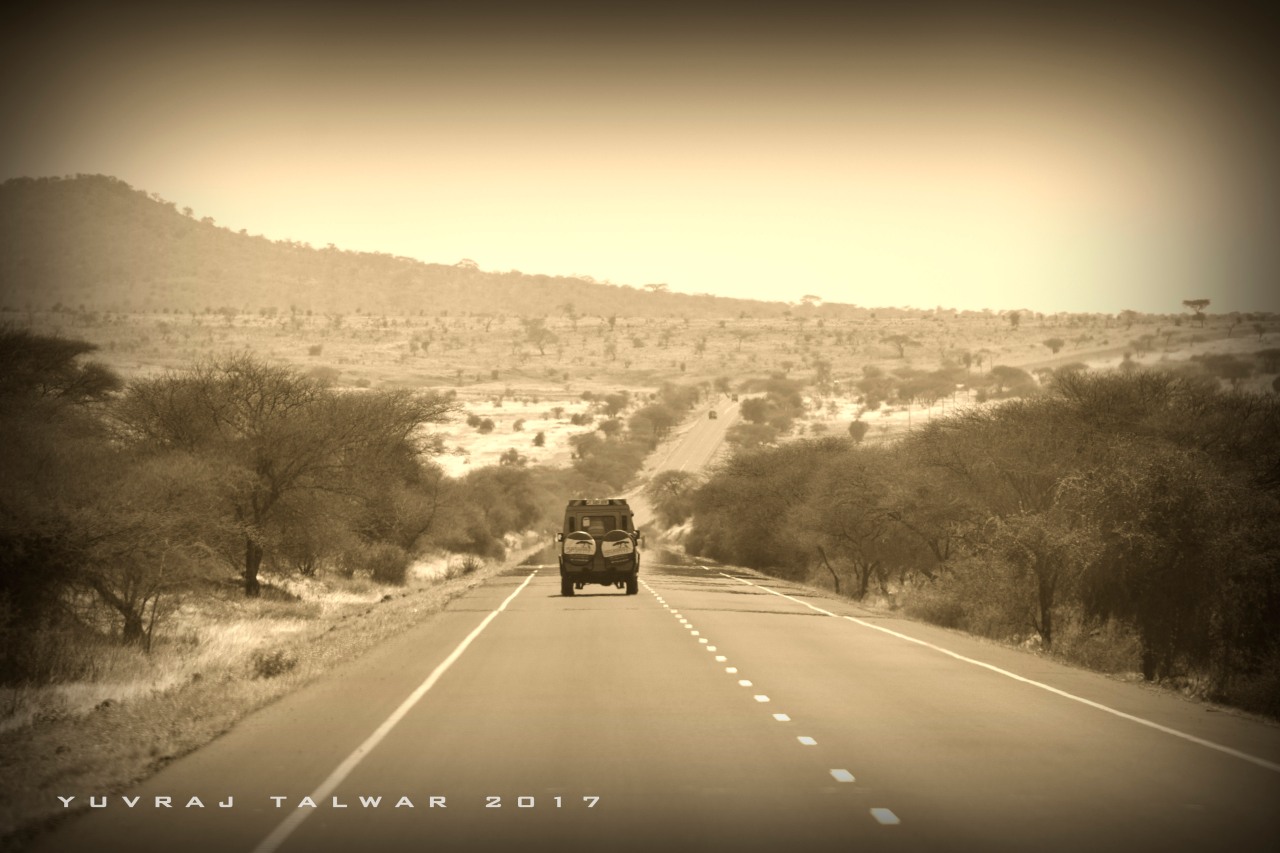