The Jewel of the Aegean

The Greek Isles, sitting in the Aegean Sea between Europe, Africa and Asia are actually a cluster of different island groups. We have the Sporades, the Ionian, the Dodecanese, Crete, Rhodes and the Cyclades, among others. The latter groups of islands are by far the most popular and best connected. They include Mykonos, Tinos, Naxos, Paros, Ios and Santorini (Thira).

Once romanticized as a destination for wealthy yatch-owners, the Cyclades are a great group of Islands to tour without breaking the bank. Some, like Mykonos and Santorini, might seem expensive but that just means you have to be a little more careful where you eat or stay the night. You are rewarded with pristine beaches (white, red or black sands depending on where you go, or how colour blind you are), quaint cobblestone villages, great hiking trails, taverns with superb Greek food (here they just call it food), even European style sunbathing. These islands have something for everyone – families looking for some beach time, history buffs looking for architectural remains of civilizations over 2500 years old (you can’t throw a stone in Greece without hitting a museum), youngsters looking for adrenaline charged beach parties, or just simple travelers who want to do people-watching while sitting in one of the numerous taverns sprinkled in every town and village, drinking their potent Ouzo.

Even though it’s true that Greece isn’t as cheap as it was before the drachma gave way to the euro, it’s still cheaper than most of Western Europe. If you really want to go bare-bones basic, then avoid Mykonos and Santorini. Spend more time on Naxos, Paros and Tinos. In any case, no island in the Cyclades will disappoint.

So here’s a rundown on the three most popular islands of the Cyclades.

Even more beautiful than what you see in the brochures, Mykonos really charms you. The cobblestones streets (sometimes barely 4 feet wide), the whitewashed walls which look as if they’re painted every few months, the sea facing taverns of the main town (chora), the beaches spread out over the west side of the island, all make you feel that even 10 days wouldn’t be enough.

In the main town, Little Venice is a must visit for its sunsets. The taverns lined up here are a little expensive, even for Mykonos, but what you pay for is the view. 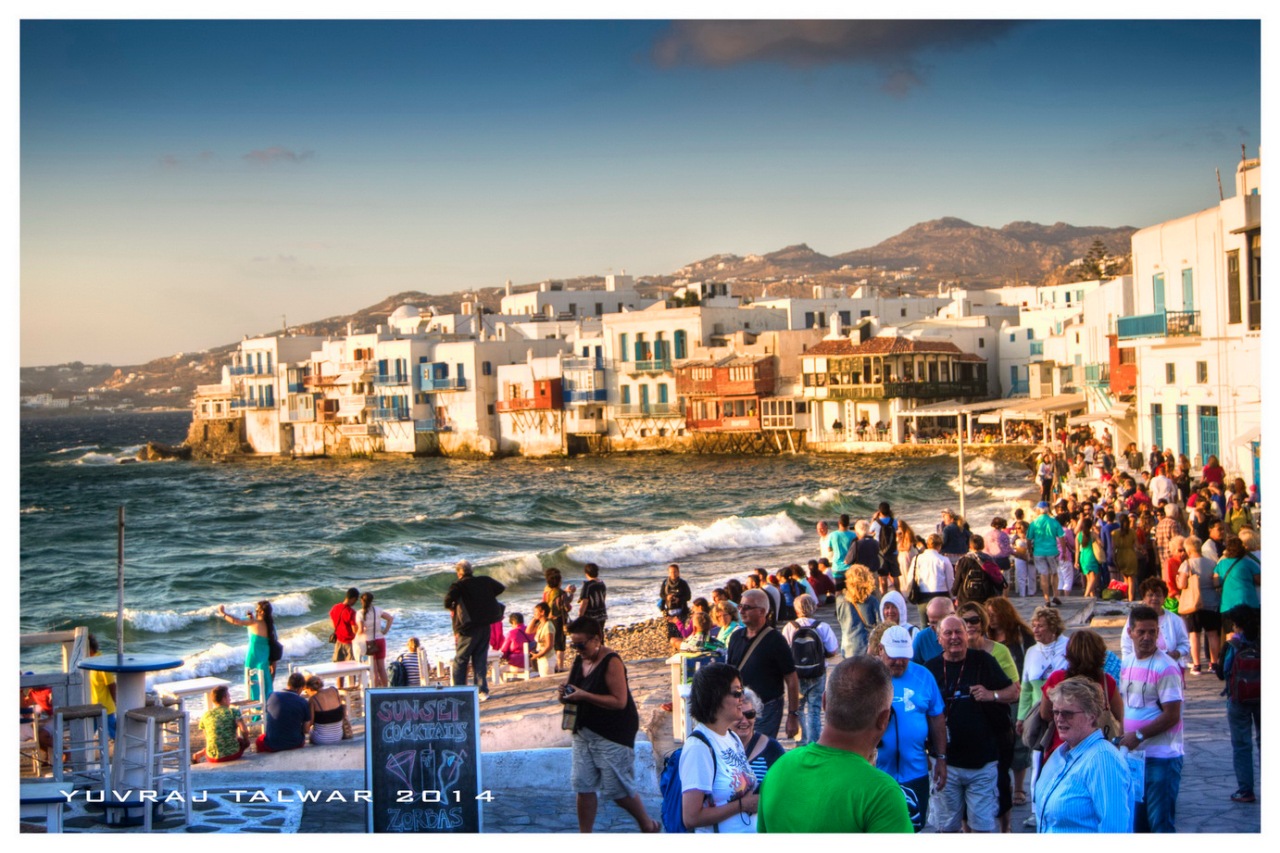 Little Venice at sunset. Can you see me? I’m 24th from the right.

So pull up a chair and order a drink. Detach yourself from the loads of tourist taking photographs of the sunset (with their flashes on) and just enjoy the incredible saturation of colours of the Aegean Sea. 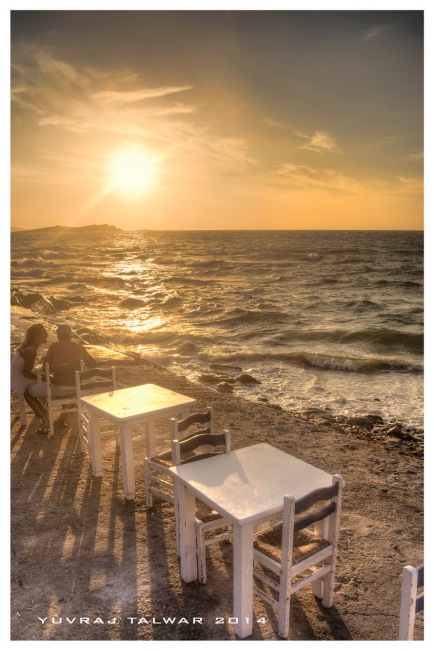 A sunset drink, far from the maddening crowd

On my successive days, I walked around the entire town during sunsets, undisturbed, while everyone was busy filling up their memory cards.

The streets of Chora

Delos, the little island across the ocean was considered one of the most sacred sites in ancient times. No one was allowed to be born or die there. It’s an archaeological site and a day visit is a must. The boat leaves from the town harbour and costs 18 euros for the trip, with 5 euros as entry fees. It’s a good idea to take a guided tour once you reach, otherwise you’ll end up just looking at 2000 year old rocks and going back home, with no clue as to their significance.

The island of Delos – one of the most important, historical and archaeological sites in Greece.

The Windmills, which are right next to Little Venice, are another attraction. Just remember that area is really windy, so all your photos are sure to come out with squinting eyes and wind-blown hair. Think Jim Carey in Ace Ventura. A very good place to view the sunset – the background with cruise ships sailing past, and the foreground with stupid tourists, too close to the embankment, getting drenched with sea water. For photos, try a higher vantage point like the road leading up to Ilio Maris hotel.

As for the beaches – Paradise and Super paradise beaches are the more famous ones, and each can be done in half a day with a lunch thrown in. Better make it the first half as the vibe gets more party-like as the evening approaches.

The Archaeological Museum sits near the town harbour and has finds from the nearby island of Delos, including stone sculptures and tiled artworks. The other is the Nautical Museum of the Aegean which house parts of old ships and beautiful models.

With cruise ships making their customary stop in Mykonos, it’s no surprise that the island caters to the more affluent. It is more expensive than the rest of the Cyclades, but you’ll have no regrets when you get back. Its charms lasts a lifetime. 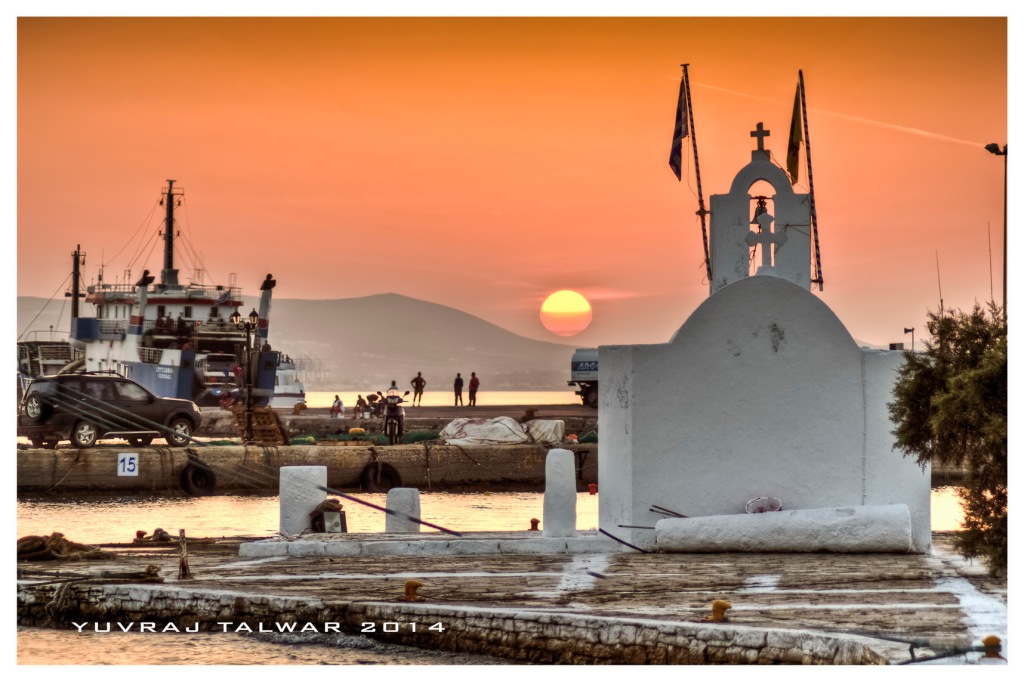 Probably the first you notice once you arrive by boat and are taken to your hotel is that this island is actually green. There are trees, shrubs and small strips of grass in front of houses. The main town is a beautiful stretch running parallel to the sea with a promenade filled with taverns that are lit up during the night. Naxos also has vineyards, so ask for the local produce when you sit outside in the evening soaking in the sunset. The other difference is the noticeable lack of jet-setters that tend to plague Mykonos. There are also more locals here than on the other islands, as Naxos has permanent residents throughout the year. It’s welcome change from the hustle-bustle of Athens and Mykonos.

The main town of Naxos

Much cheaper than Mykonos or Santorini, Naxos is perfect for staying more than a couple of days. Take your time to explore the island, its little villages and museums. 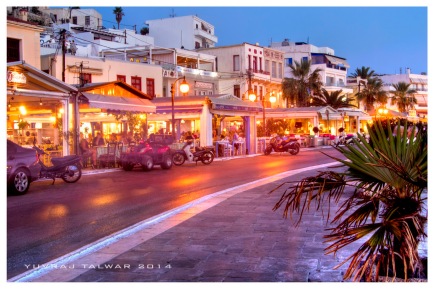 The main harbour-front with its plethora of restaurants

This island is the idyllic Greek holiday; lying around on the beach during the day, having lunch in one of the numerous taverns, walking around the chora in the evening and sipping the locally produced Kitron liqueur, in one of the harbour-front restaurants. Waking up in the morning and doing the whole routine all over again. It just doesn’t get better than this.

The beauty that is Santorini starts from the ferry ride when you curve around the inner rim of the caldera. The whole island with its majestic cliffs is visible before you. Looking around you’ll realize that you are in the middle of the ancient volcano of Thira, whose eruption wiped out the Minoan civilization on nearby Crete. The different villages are sprinkled across the rim of the volcano. I highly recommend travelling by ferry to Santorini rather than taking the flight.

Unlike Naxos, this island has much of its flavour in its villages rather than beaches. The main town of Fira is the hub from which all the buses leave for different places. It has the maximum hotels, restaurants, night life and tourists.

The beach resort of Kamari is half hour bus ride from Fira, and is basically black volcanic sand. Very interesting to look at but will burn your skin if you walk bare feet mid-day. Families especially have to be careful – kids screaming without a reason are fine, but kids screaming for a reason are worse.

Akrotiri is the other must visit archaeological site. On the way to the Red beach, this covered dig-site was a Minoan village during the Bronze Age, which was covered in volcanic ash due to the eruption of Thira, about 1500 BC, along with the nearby island of Crete. As always, I would advise joining a tour group to fully understand what you’re looking at. It’s a great experience walking through a 2000 year old village and see for yourself the way they lived.

The Red beach is a 20 minute walk further down the road across a hill. It’s again a volcanic beach with sharp pebbles, it’s only distinctive feature being its colour. You’ll feel like a colourblind hedgehog. Be careful on the way down.

Oia, at the edge of the island, is probably the most beautiful village to stay, even though most people come here only for the sunsets. It has fantastic views on both sides and has more expensive shops and restaurants than the rest of the island. My advice – after the stampede of the sunset finishes, settle down in one of the restaurants with a bottle of Ouzo, and watch the caldera change from yellow to orange to red.

Order another bottle, and then watch the entire cliffside village twinkle with lights late into the night. 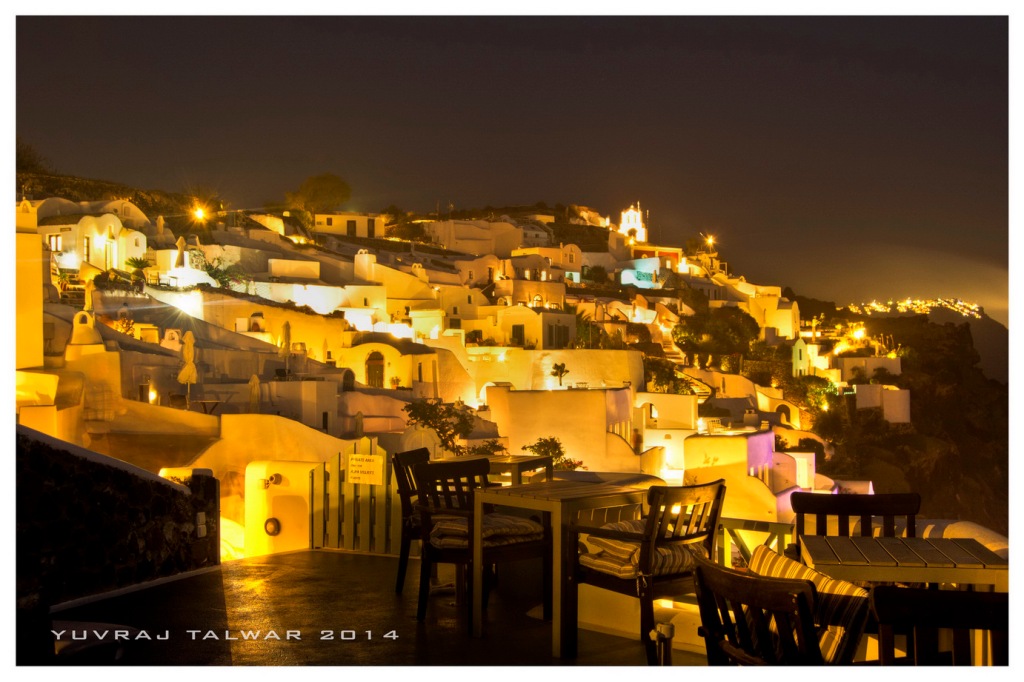 Stagger back to your hotel along the stone pathway, and then get ready to watch the sunrise in the morning. Do this for two days and you’ll never need to take a photo of the sun ever again.

To get to Mykonos from Athens, the port of Rafina is closer. For Tinos, Naxos or Santorini, you’ll have to go from Piraeus. This port is a little outside Athens but connected to the metro, which has a stop right across the harbor. If you are staying anywhere in the Plaka area of Athens, the Monastiraki Metro station line will take you straight to Piraeus.

The ferry services are two types – one is the Blue Star ferries, with restaurants, bars and walking areas, but a little slower; the other are the catamarans, which are sitting-only but faster. I personally prefer the Blue Stars. Each journey between islands becomes a mini-cruise. You can also stretch your legs, get a beer from the bar, hang-out on the deck, and take photos of the exquisite scenery as you sail past islands.

Isn’t that what you’re here for?