Tryst with a Tiger

But there are differences. I sometimes like a cold beer, he doesn’t drink. Human being can really annoy me; he’s at peace with them. I’m 6 feet zero inches, he’s 10 feet two. He can retract his nails, I can’t. That’s about it.

Oh. And he’s a tiger. In fact he’s the sole owner of the area around Khinanauli forest guest house and one of the largest cats in Corbett National Park.

The first time I saw him was in the Brijrani Zone, years ago when he was a timid little cub. Well, as timid as he was ever going to get. Jeep safaris used to scare the wits out of him and any human contact made him uneasy. Even a click of a shutter would disturb his afternoon nap, and he would spend large parts of the day just hiding from the scores of tourist hounding his tracks.

When I came next he was dethroned by a bigger male called Khali and had subsequently moved his territory north towards the grasslands of Khinanauli. I saw him during one of the summer months while I was seated on an elephant and we were coming back from an unsuccessful safari. He had just about learned the timings of the last noisy jeeps, and was seated under a jungle palm canopy, patiently waiting for night to start. He didn’t count on a single tame elephant disturbing his peace, so he quietly watched us. And we, him. Those were days when I had normal film-based Canon AE 1 without autofocus, and I’m afraid I couldn’t capture his beauty as accurately as I would have liked.

Over the years, on trips around Khinanauli, I used to see his pug marks, and learnt to distinguish them easily – he had a slight fold in his skin under the pad of his left hind leg. When I saw him in December of 2011 he was a big adult with a magnificent coat which glowed in the winter sun. His head was almost as wide as my shoulders, and his pads were as long as my open palm. He was just about to take a drink at a small water-course leading to the Sambhar road when we turned the corner and faced him. I don’t think he recognized me. Not through the bad-hair-day I was having. He slowly quenched his thirst and retreated backwards towards the dense brushwood, without once taking his eyes off mine. In one leap he was out of sight. Try as we might, we never caught up to him.

He remained absent for a long time after 2012, leading to speculations of his death, but when I visited again in December 2013, on my first entry towards the Dhikala FRH, I saw his pug marks on the exact same track he used every day. A stickler for routine, the pug marks started exactly from the dry watercourse that cuts across the road a little way from the Khinanauli FRH to the banks of the river 300 meters off. The rear pug mark was imprinted over the front, meaning he was walking at a leisurely pace. Knowing his timings, we patiently waited for 20 minutes and promptly heard the undergrowth rustle a little way ahead. When the rustle suddenly ceased, my guide looked worried. Bhola had seen us and for the first time I felt he was uncomfortable. A change in wind direction after 2 minutes told us why. The smell of a dead animal was distinctive and it could only be his kill. Apparently, we were right across his path and the only way he could reach would be to cross us. So, some quiet reversing saw us beyond a thick lantana bush and a minute later a crunch of gravel confirmed that he had picked up the track where his kill was. Ten minutes later, a snap of a bone cracking again told us that he was feeding contently. Smiling inwardly and hoping that this, one-and-only intrusion of his life because of us, wouldn’t change our relationship, we silently moved on.

It was just as well.

Two years have passed since i allowed him to cross the road that freezing winter morning, and I haven’t seen him since. The guides say that his territory has changed and he has moved further north towards the foothills. That a tigress with cubs has taken residence in Khinanauli. 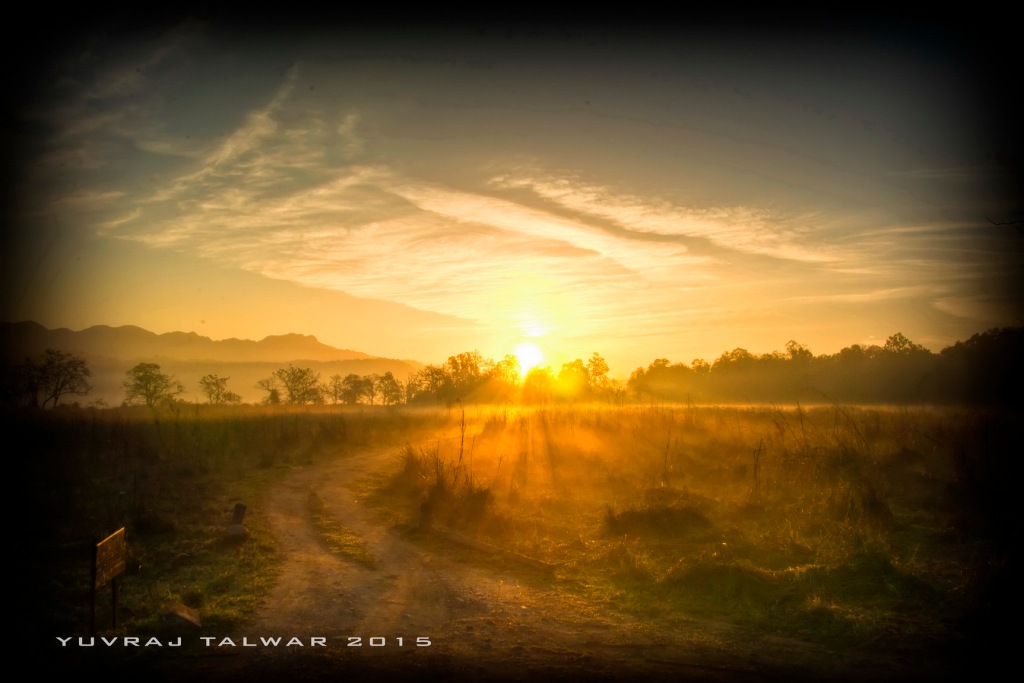 I know better. Tigers don’t leave their areas without a fight, and no male will leave it for a female. He’s gone to the happy hunting grounds, years before his time was due.

No body has been found, the tiger census states that the population has increased and tourist are happy just to see tigers. Any tiger will do, they all look the same. I have my own theory about him, but this isn’t the place to discuss misdemeanor. Nobody will miss just one single tiger.

Even now when I cross the dry watercourse near the FRH, I have this heavy feeling in my heart that I never actually heard him roar, never saw him fight for territory, never saw him charge at jeeps, or even lie hidden in the undergrowth waiting for vehicles to pass. He really didn’t need to make his presence known any more explicitly than just standing quietly. For him, that was enough.

He was my Richard Parker. And I’ll really miss him.