In the Greek Cyclades the pride of place is usually given to islands such as Mykonos, Santorini and to a lesser extent Paros. But after a couple of reviews from people who had travelled around these isles, I changed my mind. That, and the fact that an aged Greek gentlemen who was sitting in front of his shop in Monastiraki, Athens, gave me a look over and said matter-of-factly after I finished haggling with his son inside – “So, Paros next I presume?”
I gave a non-committal shrug – “Not decided yet”
He went back to his paper – “It’s always Mykonos or Paros or Ios for you people”
I stopped short and turned around, intrigued – “So, what would you suggest?”
He flicked one edge of the paper down and gave me the once-over twice. Looked at my feet, my bag, and my clothes – “Hmm, let see – hiking boots, not sandals. Gore-Tex pants, no shorts, cap and sun glasses, camera bag bigger than backpack, full-sleeved collar, not half-sleeve t-shirt. Very obvious.”
And turned back to the paper.
I blinked a couple of times.
After a prolonged silence, without looking up he said – “Got one of them travel guide in that backpack?”
I shook my head.
“Looking for a “good time?”
I frowned, confused.
He caught that – “No, eh? For you, across the bay”
So the next day I’m on the Blue Star from Piraeus to Naxos. That little decision changed my holiday.

The first you notice once you arrive by boat at Naxos and drive to your hotel is that this island is actually green. There are trees, shrubs, olive plantations and small strips of grass in front of houses. The main town is a beautiful stretch running parallel to the sea with a promenade filled with taverns that are lit up during the night. But the most obvious difference is the noticeable lack of jet-setters that tend to plague Mykonos or Santorini. There are more locals here than on the other islands, as Naxos has permanent residents throughout the year. It’s welcome change from the hustle-bustle of Athens.
It’s also much cheaper than other islands, perfect for staying more than just a couple of days. So take your time to explore the island, its little villages, beaches and museums.
Instead of staying in town, I decided to stay at one of Naxos’s gorgeous beaches. The choice fell on Agios Prokopios, being relatively close to town, yet a small bus ride to the other west coast beaches.

The hotel where I stayed, Hotel Katerina, was just off the main road from the beach. It’s a gorgeous family-owned property with a quintessential Greek design language of white-washed walls and blue shutters. Stone paved walkways, big pool, squeaky clean rooms and far enough from the main road to be quiet. When you feel it can’t get better than this, you meet the hosts. George and Maria are warm, caring and running around 24 hours a day looking after their guest. They were very instrumental in making my stay as pleasant as it was. 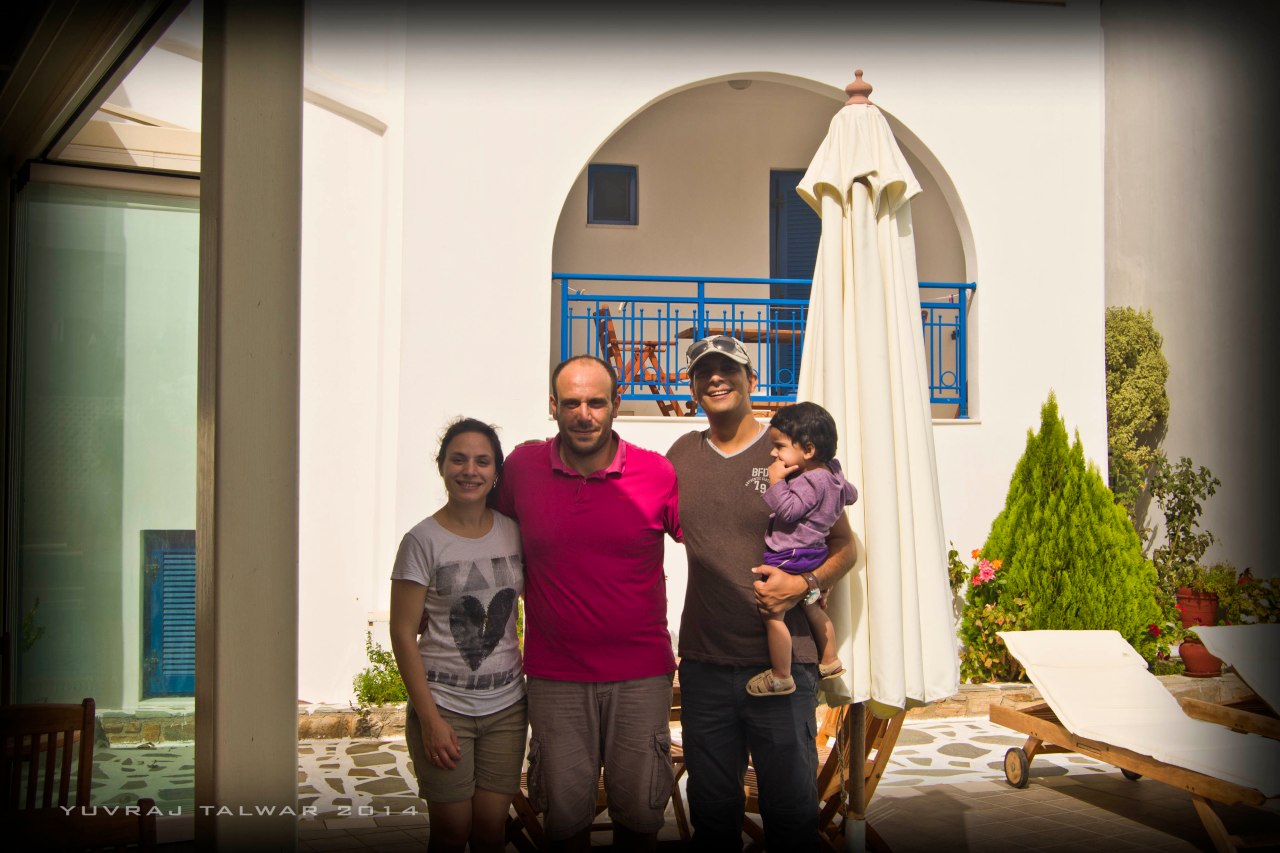 Within a few days you realize that this island is the idyllic Greek holiday; lying around the beach in the day, having lunch in one of the numerous taverns, walking around the chora in the evening and sipping the locally produced wine in one of the harbor-front restaurants. Waking up in the morning and doing the whole routine all over again. It just doesn’t get better than this. 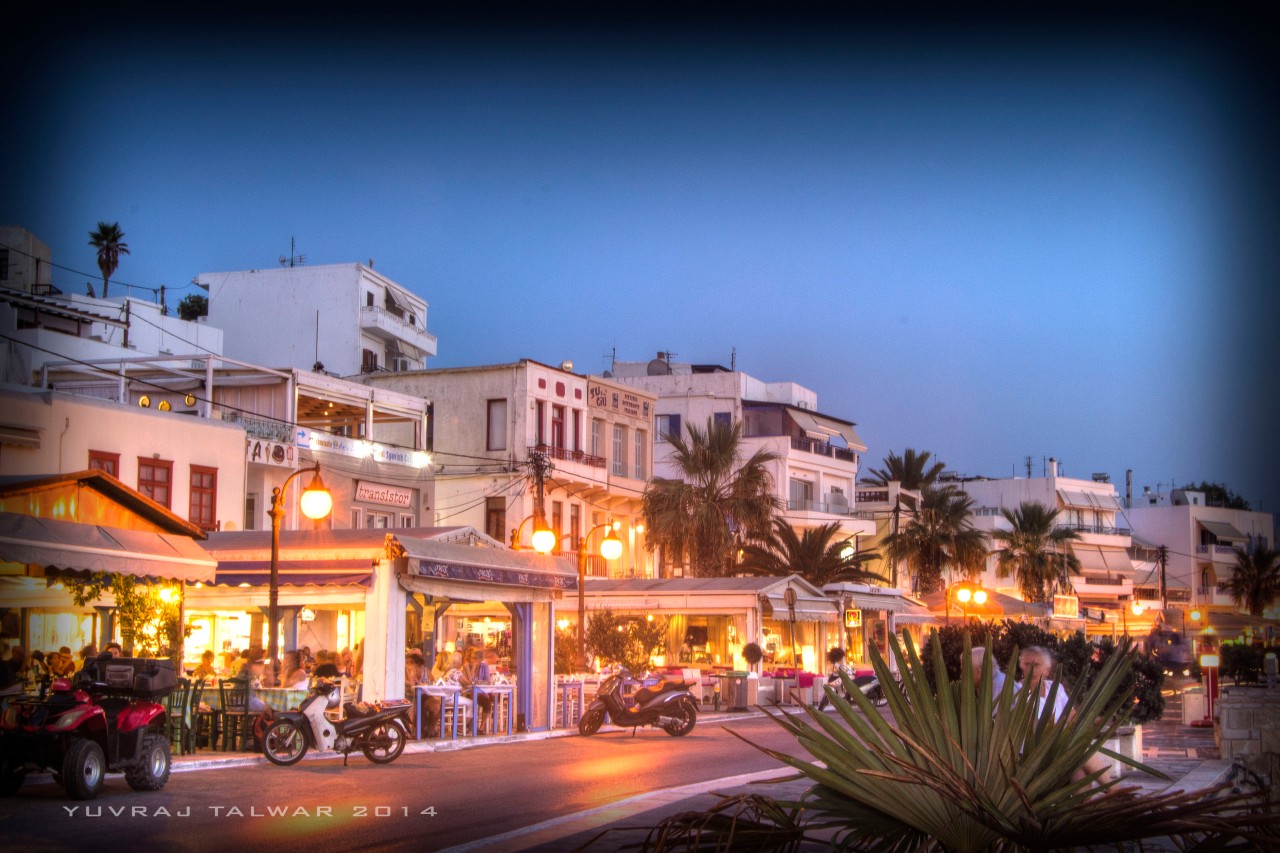 Except that Naxos has much more to offer, the beaches being just one of them. Here is what you can see.
Portara. Probably the most famous landmark of Naxos. As soon as you step down from the ferry, it’s towards the left (or north) side of town, connected by a small land bridge.

The stone portal is basically an entrance to an unfinished temple which was supposed to be facing the island of Delos (Apollo’s birthplace, near Mykonos). Built in the Ionic style, it stands on its own little peninsula, watching ships go in and out of the island. It’s the first and last thing you see of Naxos. The best time to visit would be during sunset, when the entire town, harbor and castle have an orange glow. There are small swimming spots among the rocks on the strip of land towards the Portara.

Kastro. Walking up the slope from the main harbor promenade is this 13th century castle, with a catholic cathedral, archeological museum (of course) and a Venetian museum. Once a house of a rich Venetian noble, you feel as if you’ve stepped into a different world, one that is centuries old. It’s important to visit all the rooms, even the small and seemingly unimportant ones. Admire the furniture, cutlery, utensils, books and other items of daily living. If you reach here during the evening time, you’ll get a fantastical view of the sunset and it’s a great place for photographing the harbor-front and chora. 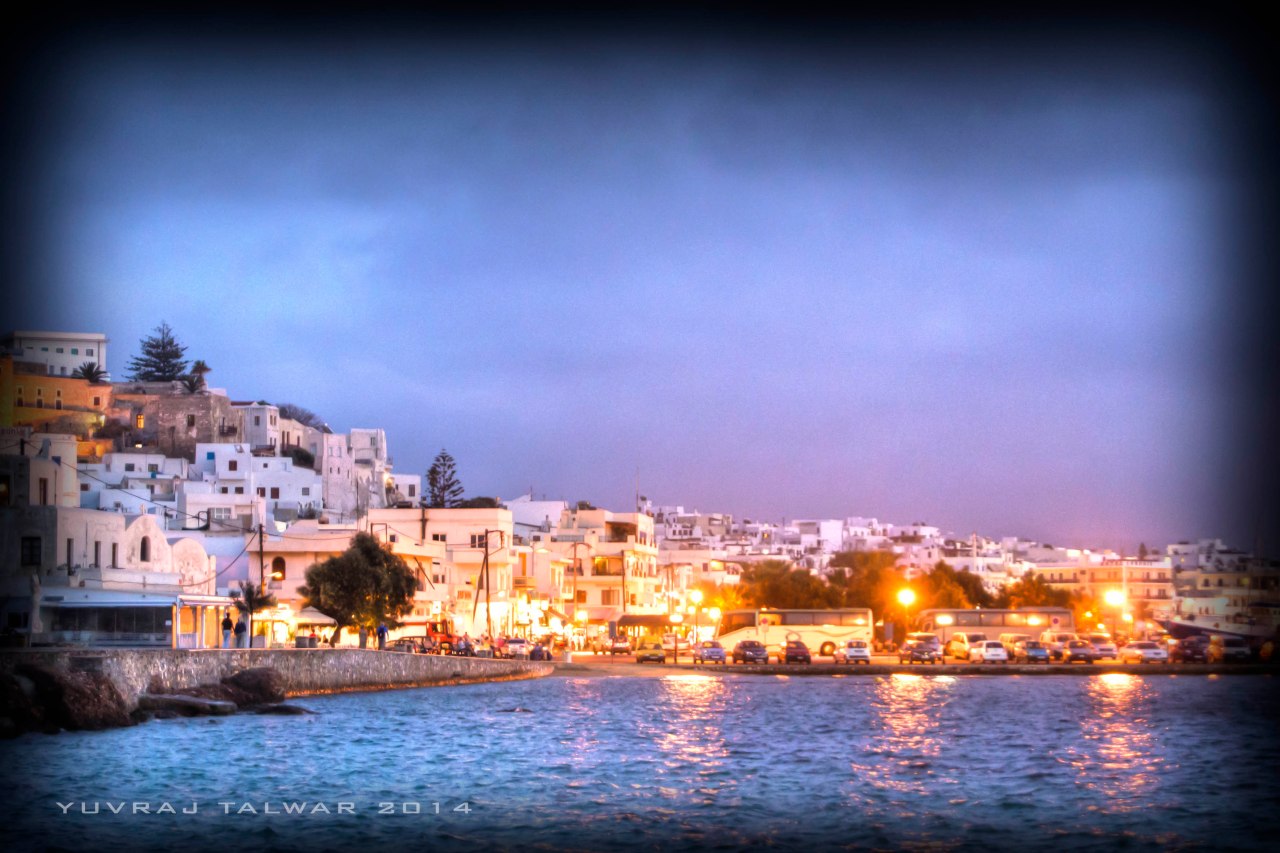 Zas Mountain. Naxos also boasts the highest peak of the Cyclades -Mt. Zeus. It’s about 3300 feet high and is in the Trageo region. Zeus, of course, was the god of the sky and the king of 11 other gods, all together known as the Olympians. The hike up the mountain is a good idea if you are fit enough. It’s about 2 hours and you get great views of fertile lands and lush valleys, characteristic only of Naxos.
Eggares olive press. This village is about 7 kms north of the chora. The olive mill is located in the centre. Dating back to 1884, there is also a museum and gallery. You’ll see the process of olive oil extraction and even the original equipment, which is in pristine condition. With wine and olive oil being one of the main industries of the island, don’t forget to visit the small cafe next to it. Along with everything on display, like marmalade, cookies etc, try the lemon cake, which is made with a butter substitute. (You guessed it – olive oil.)
Finally, the beaches of Naxos are some of the best in the Cyclades, the entire western part of the island basically being one long sandy strip broken up by rocky outcrops.

Agios Prokopios. A short 20 minutes bus ride from chora, this golden sand beach is wide and has crystal clear water. A good part of the beach has taverns and hotels running parallel to the road, from which sun beds can be hired for about €5. The northern part has some snorkeling opportunities and European style sun bathing i.e. wearing only a smile. It’s a good family beach though, with a gentle slope but some rocks towards either end. The bus stop is at the southern end of the beach, and there are lots of places to hire quads, bikes and cars.
Agios Anna. Further down from Agios Prokopios, this beach has less crowds and finer sand. Most people prefer this type of sand, but I always find that it sticks to towels and clothes, and is difficult to clean off. This beach is, again, preferred by families and children. It has some snorkeling amongst the rocks on the edges of the beach. But one has to be careful, the bottom of the beach is rocky in some places. If Agios Prokopios gets crowded, this beach is perfect for idling away the day, and watching the sun set over Paros, the island across the bay (as the old man mentioned).
Plaka. Probably the most famous beach on the island after Agios Prokopios – lots of eating places, lots of drinking places, lots of wind and lots of nudity. Enjoy.
Besides all the places highlighted above, the beauty of Naxos lies in aimlessly driving through the interior of the island. Going through the small picturesque villages which you won’t find listed on any tourist guide or map. Parking the bike, wandering along the small streets, sipping the fiery ouzo in taverns full of locals and absorbing that particular landscape which you won’t find anywhere in the Cyclades. It’s about soaking the Aegean sun during the day, riding from village to village in the evenings, settling down to some seafood in a tavern by the beach after sunset, and wobbling back to your room at night.
It’s about following that old adage of letting the holiday find you – preferably soaked in Mythos and without a forwarding address. Only when you experience it do you realize how much you needed it – the laid back setting which is essential to every holiday.
It was then that it dawned on me – that old man really read me like an open book. 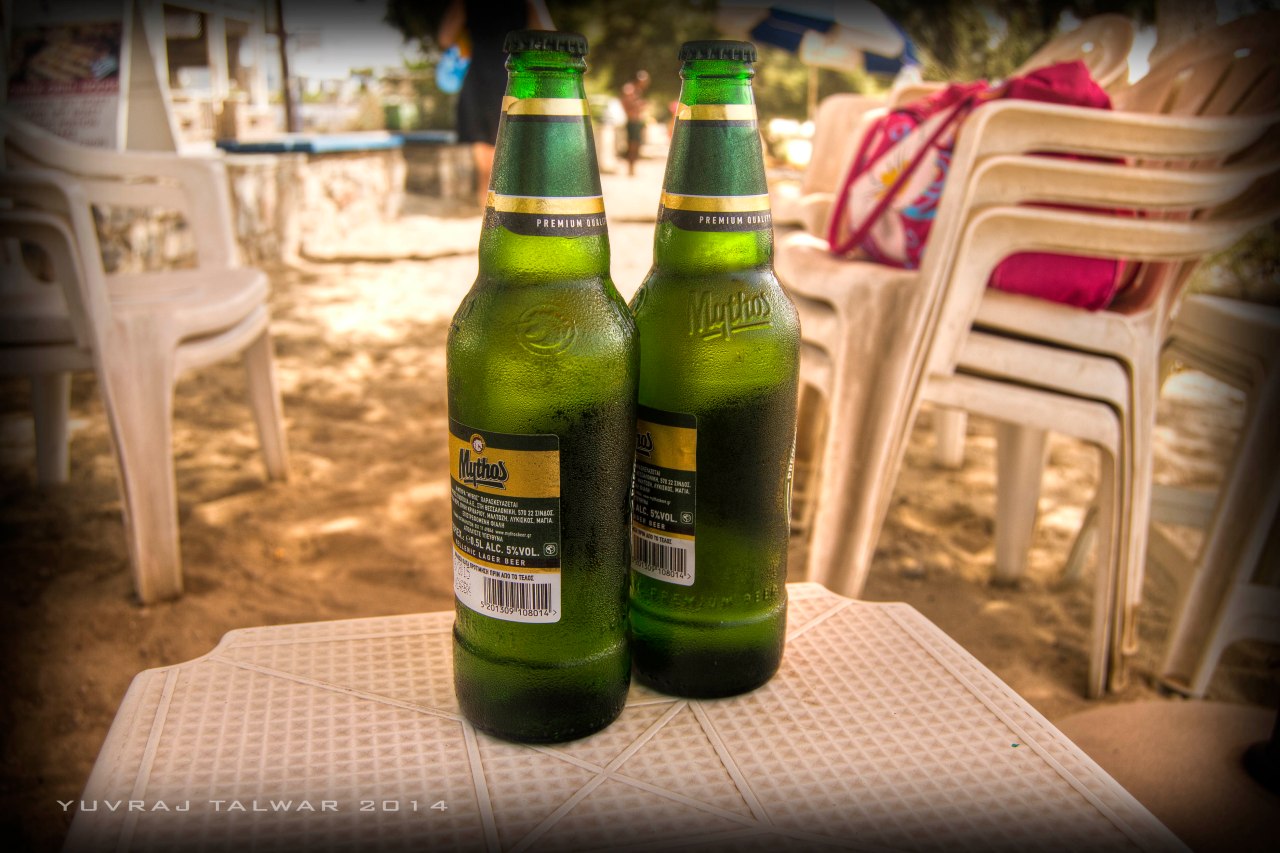